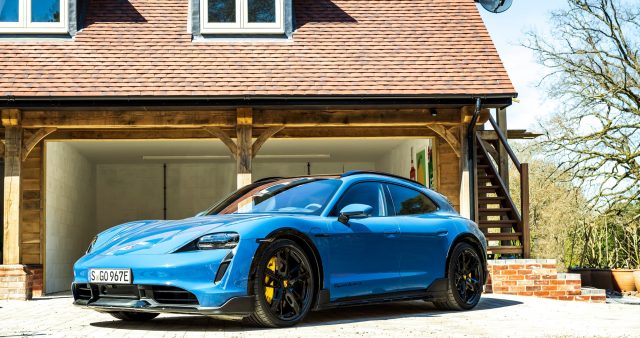 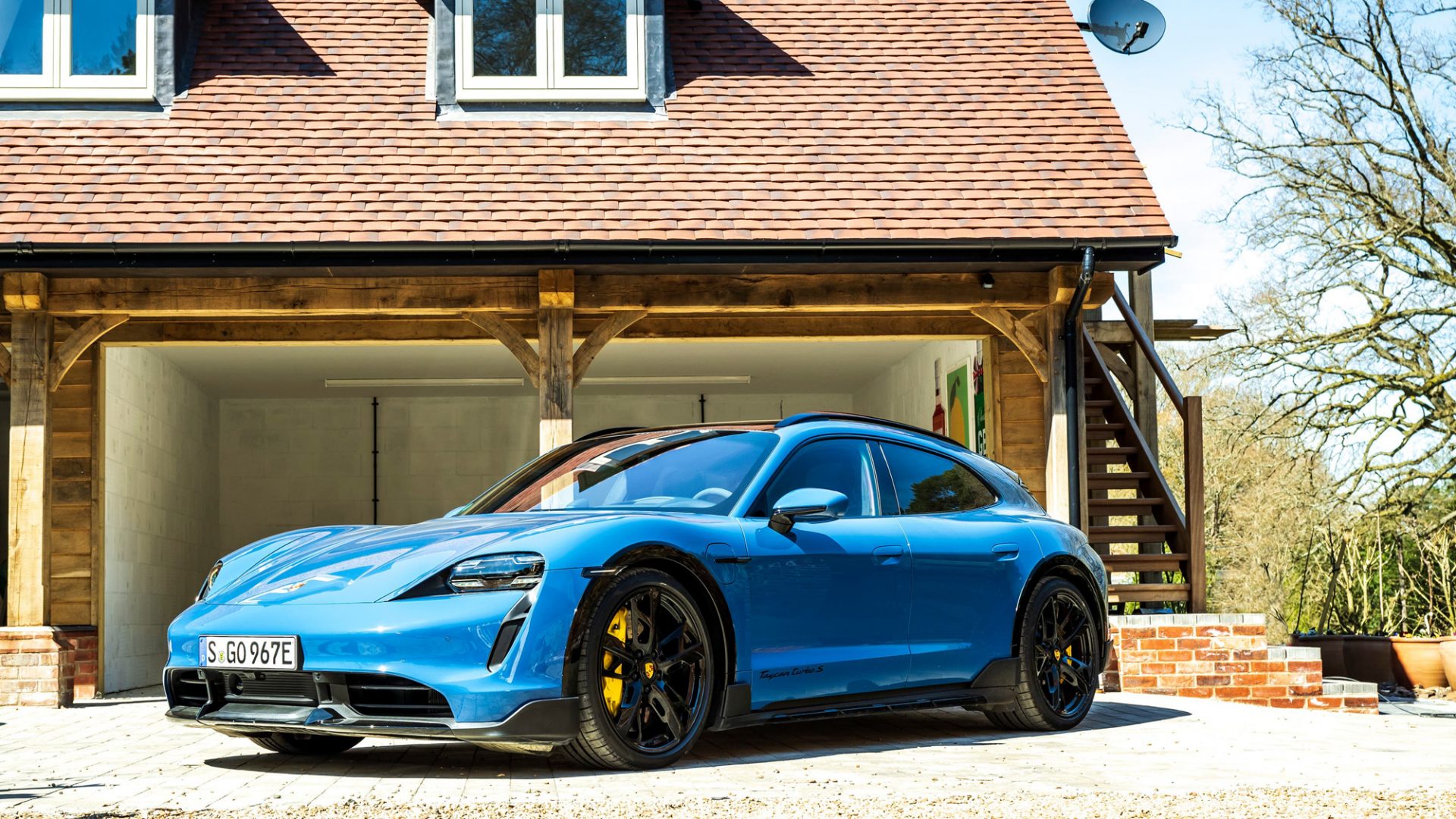 Porsche unveiled the Mission E Cross Turismo as a concept car at the 2018 Geneva Motor Show 2018 and it really made people sit up and notice.

It was essentially an electric car for those who liked to tackle more rugged terrain. But despite the positive reception, it soon looked like it was destined to become yet another concept car consigned to the history books.

However, Porsche has put that concept into production in the form of the impressively unchanged Taycan Cross Turismo, and based on the already exceptional Taycan EV, the Cross Turismo boasts some more go-anywhere technology.

We went on a short test behind the wheel in a left-hand-drive version ahead of the UK ones arriving this summer. 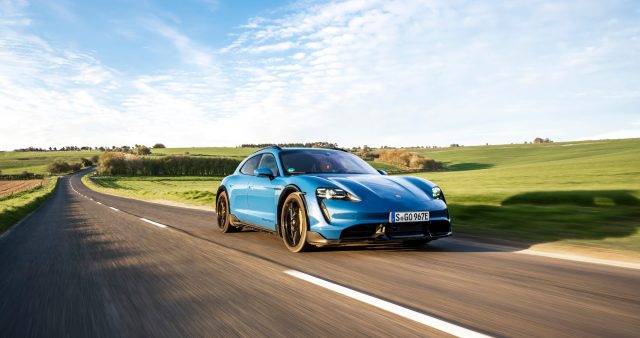 The Cross Turismo is underpinned by the same setup as in the regular Taycan, with an electric powertrain and sleek, stylish exterior combining to create a car that drives and looks like little else on the road today.

As well as having an even more striking fastback-style design, though, the Cross Turismo also gains various upgrades to help it when the road gets tougher.

All versions boast the same three-chamber air suspension as on the regular Taycan, but ground clearance is up by 30mm.

A new Gravel driving mode changes the chassis, throttle and traction control systems as well to give more assistance when driving over loose terrain.

‘Our’ Cross Turismo was the range-topping Turbo S – the most potent of the bunch, which has an electric motor on front and rear axles, combined with a 93.4kWh battery.

Turbo S cars can access a huge 616bhp – but a headline 751bhp can also be brought into play via the car’s launch control system, meaning the Cross Turismo can nail 0-60mph in just 2.7 seconds and go on to a top speed of 155mph.

Porsche says that, combined, you should see up to 260 miles from a single charge, while thanks to the ability to accept up to 270kW of electrical power, replenishing the batteries from five to 80 per cent could take as little as 22 minutes. 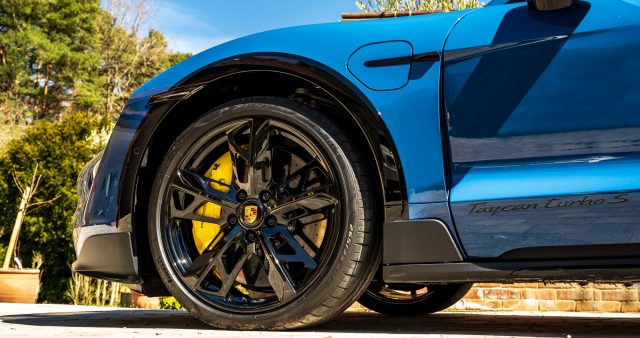 Our Turbo S test car is at the top of the range, so it has all the bells and whistles you could want.

Electric 18-way sport seats are included as well, as is a central 10.9-inch infotainment display that has all the media and navigation functions plus Apple CarPlay.

You can also option a Porsche e-bike that can be fixed to a bespoke bike carrier that lets you access the boot without having to take off the bicycle. A custom-made roofbox is also available. 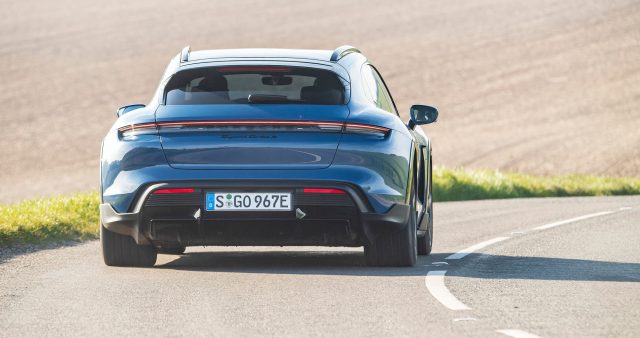 The Cross Turismo meanders along with all the poise and finesse that we’d expect from a Porsche product.

This is a big, heavy car of course, but Porsche has done very well to disguise its bulk via the light, agile steering.

It corners so matter-of-factly, too. Pitch it into a bend and whereas other EVs might push wide or start to feel ragged, the Cross Turismo merely clings on, tightening its line as it continues around.

The ride is excellent as well, with the extra ground clearance having very little noticeable effect on cornering.

Meanwhile, the performance is utterly breathtaking, as you’d expect.

Short bursts of throttle have to be kept very short indeed to preserve your licence, but the way the acceleration has been managed means you can easily drive the Taycan in a far more sedate fashion – it doesn’t have to be driven hard all of the time.

We didn’t get a chance to test the Cross Turismo on the rugged terrain for which it has been designed, though, so hopefully we’ll be able to report back on that soon. 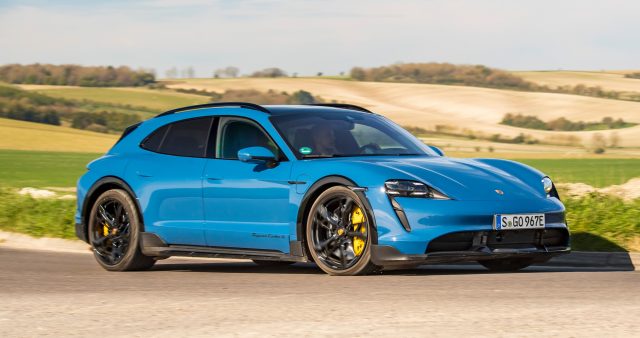 The regular Taycan brought design that seemed hard to improve upon but somehow Porsche has managed it.

The Cross Turismo’s squat, elongated proportions appear properly futuristic and thoroughly exciting at the same time, while the back of the car is a particular highlight – it’s so squat that it looks like the car is practically hugging the ground.

The more rugged styling touches give the Cross Turismo even more presence as well. The roof rails, for instance, add a go-anywhere aesthetic, while the black wheel arch surrounds and large rear diffuser enhance that appeal even more. 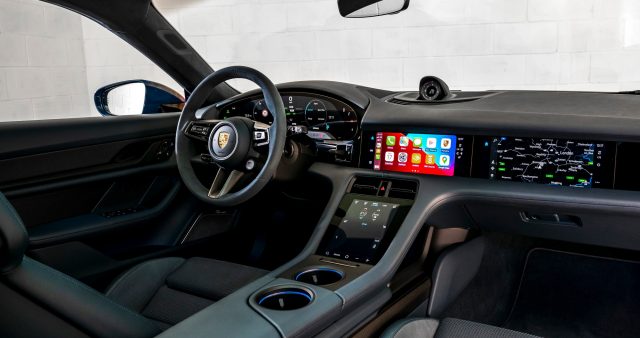 The cabin is practically unchanged over the standard Taycan – beautifully finished, with an excellent seating position combining with high-quality, great-to-feel materials.

Practicality is the name of the game, though, and the Cross Turismo does well here.

The elongated roofline means rear-seat headroom has been boosted, while luggage capacity sits at 1,171 litres with the rear seats folded down.

The rear hatch is also nice and wide, making accessing the boot and loading larger items into it a touch easier.

What do we think?

The Cross Turismo is a genuinely exciting and eye-catching new direction for Porsche.

It’s great to see a striking concept car make its way on to the public road, bringing with it the kind of design you’d expect to see on a motor show stand rather than in the real world.

Given its increased practicality and – to our eyes at least – enhanced visual appeal, we’d expect a lot of buyers who were already looking at a Taycan to be tempted by the Cross Turismo.

Given that it brings a premium of just over £1,000 atop the regular car’s price, it makes a great deal of sense in terms of cost, too.

Facts at a glance