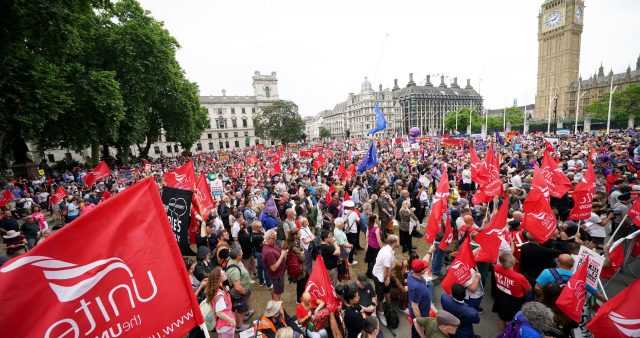 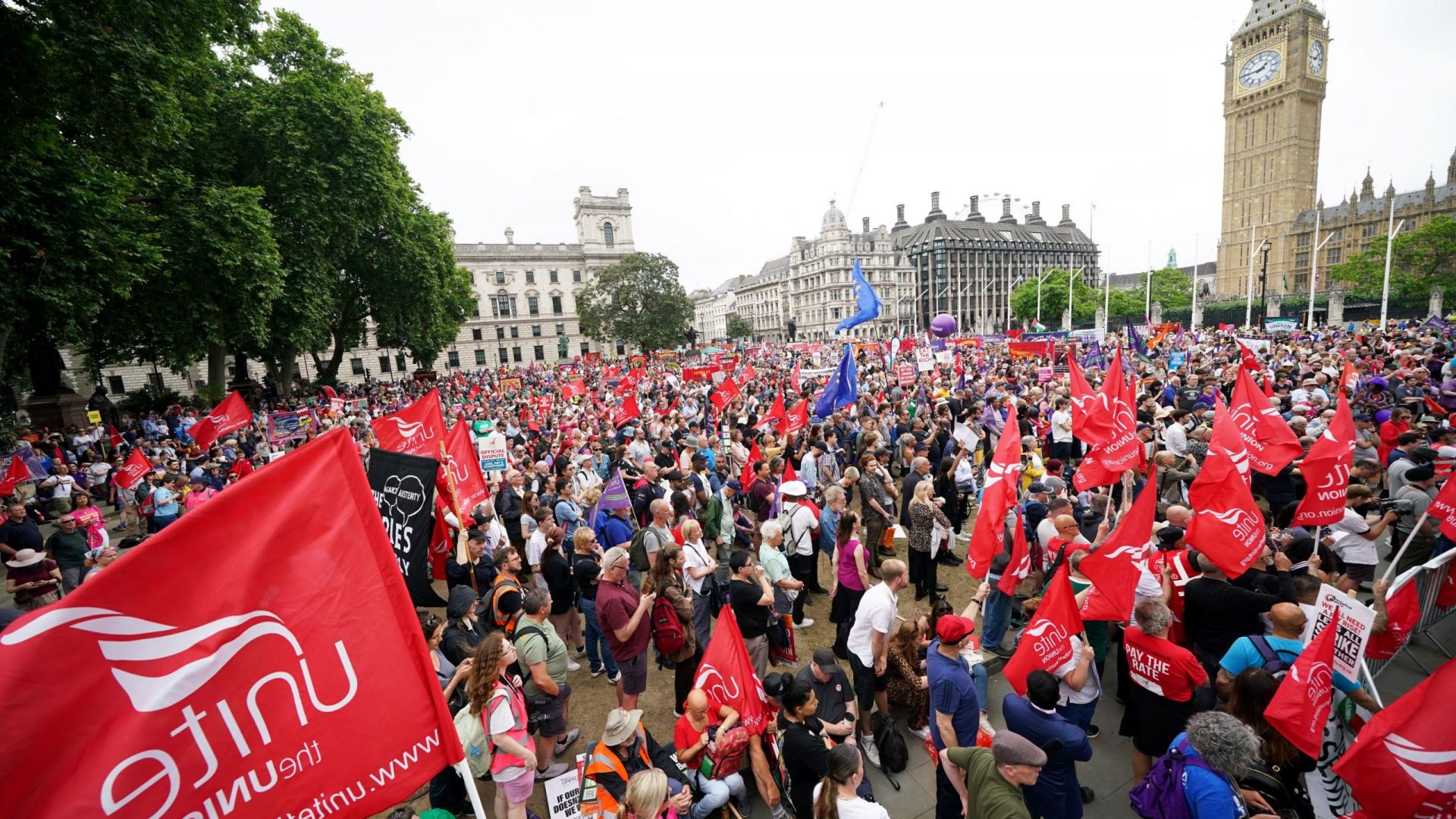 Thousands of protesters gathered in central London to demand action from the Government to combat the cost-of-living crisis.

The crowds began a march from Portland Place to Parliament Square at 12pm for a rally, with speakers including Frances O’Grady, general secretary of the TUC, which is organising the event.

The TUC says its research suggests workers have lost almost £20,000 since 2008 because pay has not kept pace with inflation.

Transport Secretary Grant Shapps has accused the country’s biggest rail union of ‘punishing’ millions of innocent people after it confirmed it will go ahead with series of crippling strikes.

Mr Shapps said the travelling public faced a week of ‘misery’ because the Rail, Maritime and Transport (RMT) union had refused repeated appeals to call off their action due to start on Tuesday.

But Labour in turn accused the Transport Secretary and Prime Minister Boris Johnson of deliberately ‘pouring petrol on fire’ because they wanted the country to ‘grind to a halt’ in order to stoke political divisions.

The Prime Minister has warned Britons that ‘we need to steel ourselves for a long war’ in Ukraine on his return from the nation’s capital.

After visiting Kyiv, Boris Johnson said that Vladimir Putin’s invasion is ‘entering a new phase’ and if Russian advances were successful he ‘would not stop at dismembering Ukraine’.

Writing in The Times, Mr Johnson also outlined a four-point plan on how the UK and its allies can best support Ukraine.

Some people arriving in the UK via small boats or the back of lorries will be electronically tagged as part of a Home Office trial programme.

The department said the 12-month pilot, which began on Wednesday, will test whether electronic monitoring is an effective way to give immigration bail to those who arrive in the country using ‘unnecessary and dangerous’ routes.

It comes after a ruling by the European Court of Human Rights (ECHR) on Tuesday prevented the first flight from leaving under the Government’s new policy of deporting asylum seekers to Rwanda.

Falklands veterans and their families gathered in Edinburgh on Saturday to commemorate the 40th anniversary of the end of the conflict.

The undeclared war lasted for 10 weeks from April 2 until June 14 1982, after Argentina invaded the occupied islands.

It claimed the lives of 255 British servicemen who were remembered as part of the commemorations in Edinburgh on Saturday.

Today, it will be rather cloudy and breezy in Scotland, with some light showers in the north. The far south of England will see variable cloud and scattered showers. Elsewhere, it will be dry with sunny spells and areas of cloud, reports the BBC.

Tonight, cloud will dissipate for most to leave mostly clear skies, but patchy cloud will linger in the east. Staying cloudier across the Northern and Western Isles, but remaining largely dry.

Tomorrow, dry and sunny across England and Wales. A bright start for most elsewhere, but cloud spreading in from the north-west later on, along with a few spells of rain in northwest Scotland.